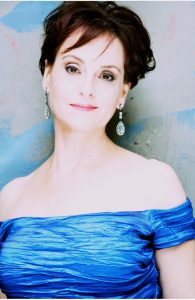 “Understudy Kathryn Krasovec stepped in with only a few hours of rehearsal under her belt and gave a powerful performance that captivated the audience on the opera’s final night.”
– WorldPress.com, 2018

“Kathryn Krasovec’s Sedley was appropriately tight, proper, and corporate, out of sync actually with the rest of the Borough. But then she is a widow of substance, of the merchant rank, and probably as miserable with herself as she is with others. At home (not shown) she downs gin martinis, shaken not stirred. Krasovec was unbending in her pursuit of Grimes.”
–Opera Metro, 2016

“This production is very well cast, including Kathryn Krasovec, as the busybody Mrs. Sedley.”
–The Broad Street Review, 2016

“However we do want to mention Stephen
Gaertner as Balstrode, Joseph Barron as Swallow the lawyer, Kathryn Krasovec as Mrs. Sedley and Casey Finnigan as Bob Boles, all of whom gave exceptional performances.”
–Toby Grace, Out In Jersey, 2016

“With a fear of mirrors that was both funny and poignant, Kathryn Krasovec mined an uncharacteristic vein of sadness in Marcellina, embracing her newfound maternal role with a palpable sense of relief.”
Opera News, 2015

“American Kathryn Krasovec and Puerto Rican Ricardo Lugo, memorably assumed the roles of Marcellina and Bartolo. Both are fine singing actors, with Krasovec’s Marcellina in particular making much of her character’s humanity, while remaining genuinely funny.”
Toby Grace, Princeton Online, 2015

” As well as having a wonderful voice, Kathryn Krasovec gave us perhaps the funniest performance as Marcellina.”
Andrew Moravcsik, Opera Today, 2015

“Kathryn Krasovec was the mezzo-soprano who sang this cycle semi-staged
brilliantly and most impressively from memory…Audenesque exhibited Heaney’s
innate musicality, as dynamic range and dynamic levels were brought to bear in
Krasovec’s resonant tones.
Sherri Rase, Qonstage.com, Audenesque, 2014

“Kathryn Krasovec, in the leading part, would have sent the old Janáček with his love mania into raptures beyond doubts. Her fresh, tender mezzo and her physical expression totally soaked up the allure of his music and thrillingly translated it into the indomitable headstrong movement of the role.”—
www.kultura-extra.de

“Above all, Kathryn Krasovec proved to be a streak of luck for this production. With apparent effortlessness, she managed to hit the most difficult intervals. Skillfully, she threw herself into the fast change between the comical and horrible. A perfect Anne.”—
SaarbruckerZeitung, Wibke Mendlemann

“The singer masters the difficult part. She incorporates drama in singing-emotion that moves nerves stretched to the limit”
Trierischer Volksfreund, Verona Kerl

“ The scale of her performance ranges from screams to melodious speaking in rich vocal nuances, regardless of whether she was standing still or moving.”
Luxemburger Wort, Wolfgang Strauch-v.Quitzow

“Kathryn Krasovec is an ideal performer for the role, based on her body language and performance skills. Cunning, crafty, wrathful and happy, she is also able to find the appropriate vocal characteristics to convey the different facets of the main character.”
Trierischer Volksfreund, Dieter Lintz